The Oldowan is the oldest-known stone tool industry. Dating as far back as 2.5 million years ago, these tools are a major milestone in human evolutionary history: the earliest evidence of cultural behavior. Homo habilis, an ancestor of Homo sapiens, manufactured Oldowan tools.

First discovered at Olduvai Gorge in Tanzania, Oldowan artifacts have been recovered from several localities in eastern, central, and southern Africa, the oldest of which is a site at Gona, Ethiopia. Oldowan technology is typified by what are known as "choppers." Choppers are stone cores with flakes removed from part of the surface, creating a sharpened edge that was used for cutting, chopping, and scraping (image 1985–0235). Microscopic surface analysis of the flakes struck from cores has shown that some of these flakes were also used as tools for cutting plants and butchering animals.

The Acheulean tradition constituted a veritable revolution in stone-age technology. Acheulean stone tools - named after the site of St. Acheul on the Somme River in France where artifacts from this tradition were first discovered in 1847 - have been found over an immense area of the Old World. Reports of handaxe discoveries span an area extending from southern Africa to northern Europe and from western Europe to the Indian sub-continent.

Acheulean stone tools are the products of Homo erectus, a closer ancestor to modern humans. Not only are the Acheulean tools found over the largest area, but it is also the longest-running industry, lasting for over a million years. The earliest known Acheulean artifacts from Africa have been dated to 1.6 million years ago. The oldest Acheulean sites in India are only slightly younger than those in Africa. In Europe, the earliest Acheulean tools appear just after 800,000 years ago, as H. erectus moved north out of Africa.

Acheulean technology is best characterized by its distinctive stone handaxes. These handaxes are pear shaped, teardrop shaped, or rounded in outline, usually 12–20 cm long and flaked over at least part of the surface of each side (bifacial). There is considerable variation in size and quality of workmanship.

Acheulean handaxes were multi-purpose tools used in a variety of tasks. Studies of surface-wear patterns reveal the uses of the handaxe included the butchering and skinning of game, digging in soil, and cutting wood or other plant materials. Additionally, Acheulean tools are sometimes found with animal bones that show signs of having been butchered.

The handaxe was not the only target of the Acheulean manufacturing process. Like the Oldowan, the flakes struck off the stone core in creating the handaxe were also used as scrapers and cutting instruments (image 70–15). Later Acheulean industry, employed the Levallois technique that yielded flakes of preplanned shape and size, greatly improved the efficiency and utility of flakes as tools (image 74-18).

It should be noted that not all of the European handaxes are Acheulean, as the production of handaxes continued into the early phases of the following stone tool traditions in both Africa and Europe. A handaxe from St. Acheul, France, has a recorded date of 500,000 B.P. (image 1980–1009; see also image 1980–1011, 1980–1012 & 1980–1014 for artifacts with similar dates). Another from the lower station of the famous site of Le Moustier, France, is dated to 400,000 B.P. and shows definite evidence of the Levallois flaking technique (image 1980–1015). Also found at Le Moustier are handaxes from the Mousterian - the stone tool industry of Homo neanderthalensis (Neandertals) - which began around 200,000 years ago and lasted until about 40,000 years ago in Europe and parts of Asia (image 1980–1016).

The Oldowan and Acheulean artifacts in the University of Missouri Museum of Anthropology collection are representative of an important breakthrough in early human prehistory. For at least the past two and a half million years, the ability to make and use tools is a skill that has enabled humankind to thrive by making increasingly more efficient use of the resources in the environment. For the majority of this time, two of the most important tools have been the Oldowan chopper and the Acheulean handaxe. 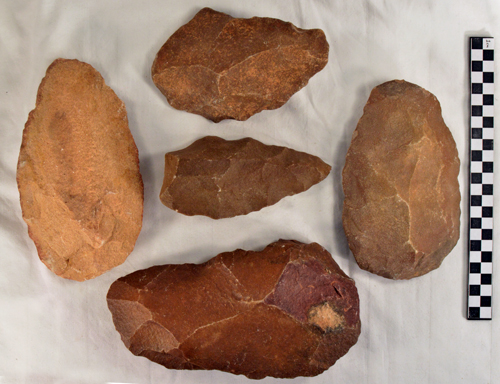 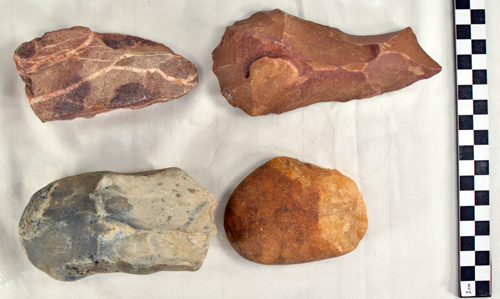 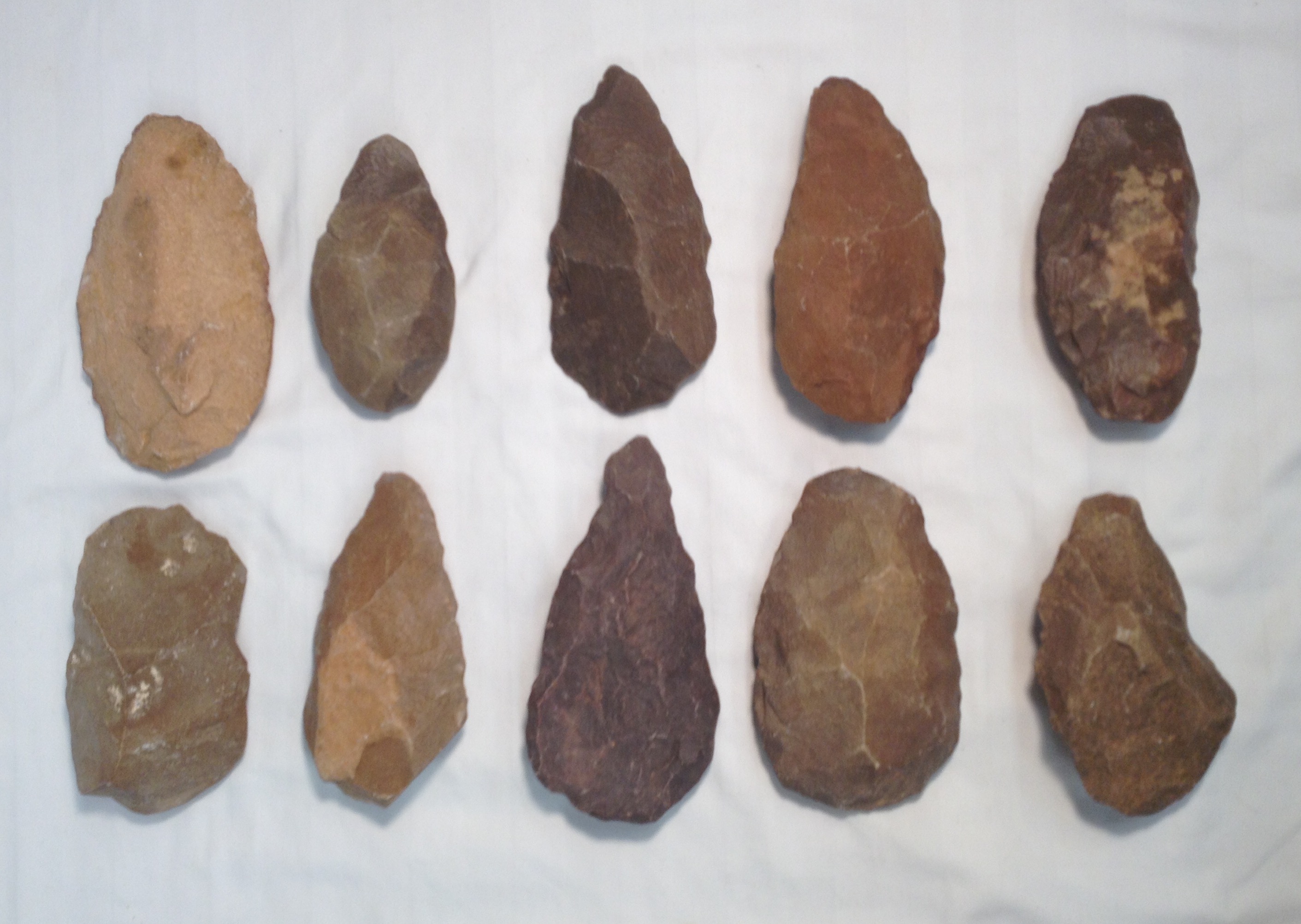 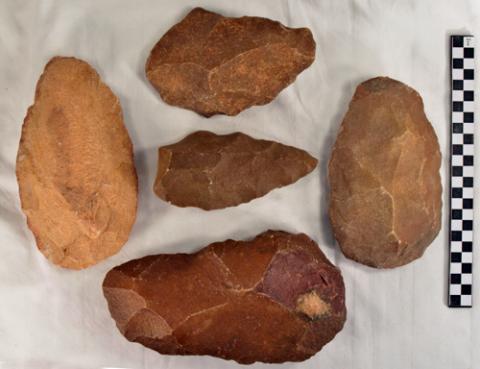