Africans have been refining and smelting metal and making iron implements since 1200 B.C. In fact, the Iron Age occurred earlier in Africa than in Europe. Iron implements grant a huge advantage to the user in all shapes and forms — working axes and hoes facilitated agricultural expansion in Sub-Sahara African societies, hunting became easier, and warfare became deadlier with the introduction of iron spears, arrow points, and knives.

Smelting was remarkably challenging in ancient Africa. It was so complex that the men who possessed the knowledge often formed guilds that guarded the secrets of ironwork. A furnace had to be constructed, hard wood for a high temperature burn had to be gathered, and the bellows had to be worked constantly for days. Iron pieces were typically intricate, and an ironworker took personal pride in the pieces he produced.  As guns and other intricate metal inventions were introduced to the region, blacksmiths mastered these new arts.

As European intervention grew in the 17th through 19th centuries, the African iron market was flooded with European metals. These new materials required less effort and energy to procure than the elaborate traditional smelting process. These foreign metals, iron included, replaced traditionally made metal, but blacksmiths continued to make their stylized metal tools in traditional forms. In the colonial era of 1880–1950, European hardware entered the African markets, and this flow of cheap European goods managed to displace the traditional ways of the African blacksmith.

All the axes in this collection are from the early 20th century and represent some of the very last styles of pieces made before the African iron market was flooded with imports and local production effectively disappeared. They would have been manufactured primarily for foreign sale, much as the limited African iron tools made today are marketed to collectors and tourists.

Photos and text by Chelsea Bilyeu 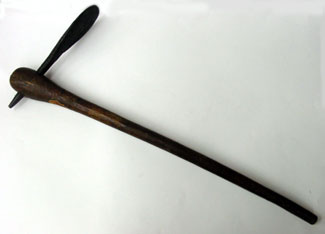 This iron implement has a wooden handle and an iron head. The head is oval shaped with a long tang that is driven through the rounded end of the handle. It is not clear whether this piece was used as an axe or a hoe. 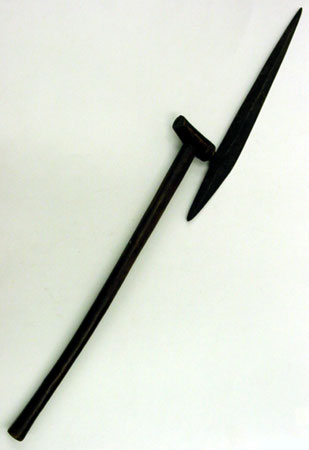 The handle of this war axe is knobbed at one end, and the blade has been set directly into the knob. The blade is very long, narrow, and thin with a tang on one side and resembles a spear blade rather than an axe blade. This style of war axe is called “mbado”  and is typical of the Tsonga and Venda cultures of Mozambique. The design makes it possible to slash as well as stab like a European-style bayonet. 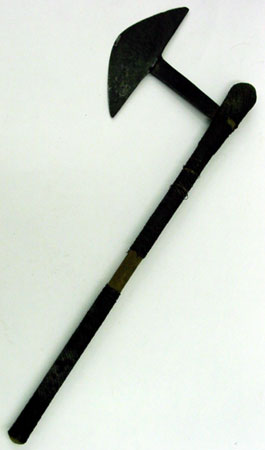 This example of a war axe consists of a metal head and a wood handle, which has been covered with a metal braid. A semi-lunar shaped head with a long tang that is set into the handle. A large amount of the attaching tang is left protruding from the handle. 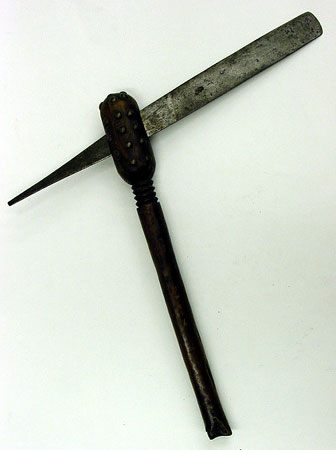 The handle of this war axe is particularly intricate, carved with two concave-sided squares and a series of rings. The knob end of the handle is decorated with brass studs, making the axe distinct from most traditional iron pieces. The head is flat and parallel for most of its length, and it tapers to a squared point where it comes out of the handle. 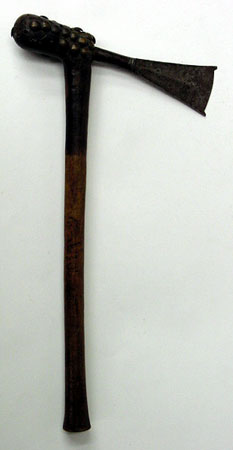 The head of this axe is triangular with a round tang and is set into a large wooden knob on the handle. The knob is decorated with brass studs. The tang and the stud decoration reveal this item’s African origins, but the treatment of the tang is more similar to what is found on Native American pieces. The tang goes all the way through the knob of wood and is bent down. 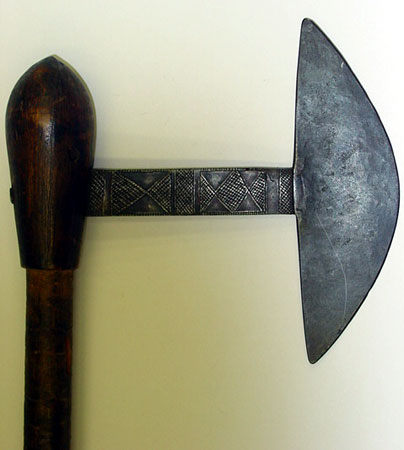 The tang of this blade is unusually long at 15.5 cm. It is wide and flat and decorated with intricate etchings and has a semi-circular cutting edge. A knob at one end of the handle holds the blade. There is more decoration below the knob and at base of handle, where it is etched in a similar pattern to that on the tang. Overall, it has the appearance of a war axe from the Bechuana of East Africa. The slight difference between this artifact and the typical Bechuana ax is that this axe has a straight handle with a flaring base whereas a Bechuana axe has a curved handle that comes to a point. 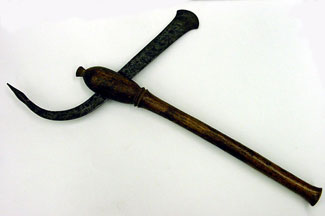 This axe is the only one in this exhibit with a steel blade instead of one made from iron. Steel is an alloy made of iron mixed with carbon, and its production occurred much later in history than the smelting and worldwide use of iron. The axe has a long slender blade that protrudes through the handle and ends in a pointed curve on the other side. The handle is wood with a large knob at the hafting end. Midway on the handle there are burnished markings and the blade is somewhat tarnished. 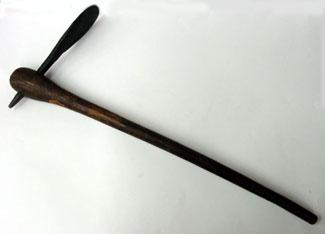