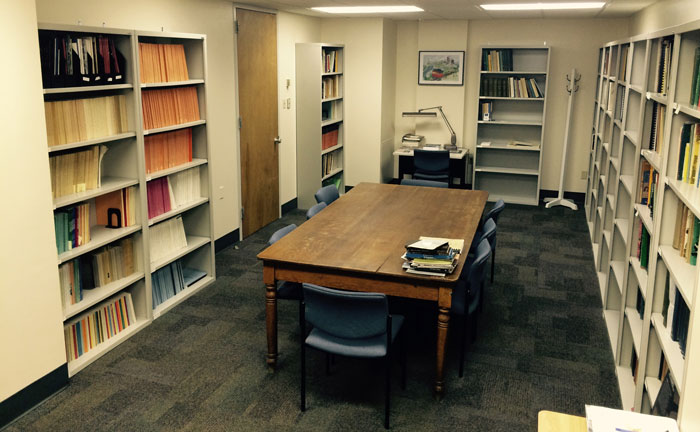 The Anthropology Library is a reference library that is part of the Museum of Anthropology’s collections. This library consists of over 2,000 books, journals, and articles on topics in anthropology. Subjects include Native American traditions, technology, and material culture; articles on African culture and technology; archaeology in South America; as well as a focus on books and articles about Missouri archaeology. The library also has comprehensive collections of journals such as The Missouri Archaeologist and the National Museum of Man Mercury Series (National Museums of Canada).

Special collections within the library include the Nancy Morejón Cuban Library. Nancy Morejón (Havana 1944) is the most celebrated and widely translated author of post-revolutionary Cuba. She is the leading writer of Havana's Black Renaissance, the first generation of Afro-Cuban artists who came of age with the 1959 Revolution. A prolific writer who has published over 35 collections of poetry and eight books of essays, she continues to work, based in her native Cuba. Member of Cuba's National Academy of Letters, Morejón has received multiple awards, among them Cuba's National Prize for Literature (2001), the Struga Poetry "Golden Wreath Award" (2006), and an Honoris Causa Doctorate degree at Cergy-Pontoise Paris University. Morejón's work addresses contemporary issues of ethnicity, gender, history, politics, and Afro-Cuban identity. Her poems stand as vibrant reflections on the transculturation of Spanish and African cultures in Cuba, on what it means to be a child of both traditions, and on how the threads of this heritage are part of the greater web of the African Diaspora in the Americas.

The library collections are available for read-only at Mizzou North, 115 W. Business Loop 70 W and are open to faculty, staff, students, and the public on weekdays by appointment only.

To schedule an appointment or assistance with searching the library database, please email: anthromuseum@missouri.edu. 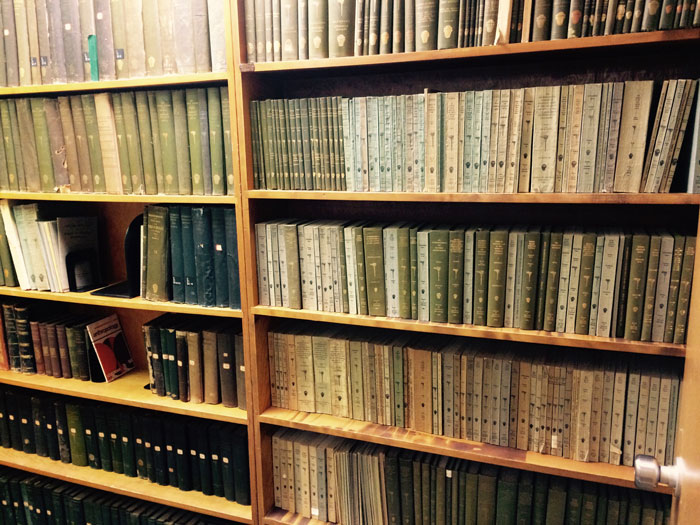 The Museum Archives provides a central repository for records and other documentation associated with Museum collections. Included in the Museum Archives are the papers of the Cordle Collection, documenting work in British Malaysia and among Native American groups of Alaska and Arizona; records of the Deevey Thailand collection; documentation, slides, and film of the Sutton African collection; travelogs and biographical information associated with the Frances Pearle Mitchell collection; photocopies of colonial documents from Hispanic archives in Central America and Spain; the papers and records of the Grayson Archery Collection; casting records for the Eichenberger collection; and original manuscripts of Museum publications.

The AAD archives also include the archaeological records and professional papers of the late Carl H. Chapman and the late Robert T. Bray. Chapman was responsible for the development of archaeology in Missouri and was instrumental in passage of federal laws supporting archaeological research. Chapman's records comprise the largest, most diverse, and arguably most important archive on Missouri archaeology for the 50-year period 1935-1985. The collection contains some 60 linear feet of document files, thousands of photographs, negatives, and slides, dozens of 16-mm films, and numerous maps and other documentary material related to his professional activities. Bray was director for 22 years of MU's Lyman Research Center and Hamilton Field School adjacent to Van Meter State Park in Saline County, the site of the Missouri Indian village known as the Utz site. The Bray collection includes documents relating to work at the Utz site, Pomme de Terre and Table Rock reservoirs, and numerous other significant prehistoric and historical period sites.

William E. (Bill) and Florence T. (Pat) Browne were both native New Yorkers who became active, accomplished archers. Mr. Browne was a lawyer and later a civil engineer and Mrs. Browne worked for the Red Cross for several decades. They lived in Manhattan and later transferred to Pittsburgh when Mr. Browne was an engineer for U.S. Steel.

The Brownes took up archery as a recreational sport while still in New York and were involved in archery organizations and tournaments. Mr. Browne became an avid collector of archer's thumb rings and archery-related ivory carvings. After Mr. Browne's death, portions of his collection were acquired by Charles E. Grayson and incorporated into the Grayson Archery Collection. Mrs. Browne donated the remaining thumb rings (over 200) to the Museum of Anthropology in 1990. The Brownes' collection of ivory carvings was inherited by Mrs. Browne's friend Eva Bowser and donated by her to the Museum in 1999.

The papers consist of manuscripts, articles, photographs, and drawings generated or accumulated by Bill Browne in relation to his research and collection of archer's thumb rings. Also included are ledgers documenting the Brownes' thumb ring and ivory carving collections.

Wendell H. Cordle and Hallie Jones Cordle were both born near Green City, Missouri, in the late 1890s. After marrying in 1916, they attended State Teachers College in Kirksville, Missouri. From about 1921 to 1931, the Cordles taught at schools in the Philippines and British Malaysia. The remainder of their careers was spent teaching at Government-run schools in Alaska and Arizona as part of the Department of the Interior. Wendell also served as principal in several of the schools. At various times, each pursued advanced degrees at the University of Missouri, Wendell in educational administration and Hallie in anthropology. Over the years, the Cordles donated a collection of almost 200 ethnographic items from Alaska, the Philippines, and Malaysia to the Museum of Anthropology.

The papers consist of the Cordles' correspondence with family members and government administrators, much of which includes detailed accounts of their interactions with the native communities in which they taught; documents related to school curricula and community projects; ethnographic interviews conducted with Native Alaskans; academic course materials; photographs and biographical information. Also included are a number of stories and articles written by Hallie, primarily dealing with life in Alaska, one of which was published in the Kansas City Star in 1941.

J. Allen Eichenberger (1905-1988) was a banker from Saverton, Missouri, and a long-time member of the Missouri Archaeological Society. Eichenberger's greatest achievements in archaeology were in the field of artifact casting, producing an estimated 700 copies of many of the world's renowned archaeological finds. His process in duplicating colors was unmatched in the field. Eichenberger performed his casting duties while a research associate for the American Archaeology Division at the University of Missouri, during which time he copied most of the known Paleoindian material from the western United States, examples of most Archaic-period types from the Midwest, numerous catlinite pipes and tablets, several pieces of engraved shell, and a number of specimens from Europe, Africa, and South America. In 1983 the Smithsonian Institution recognized Eichenberger for his achievements, presenting him with a certificate of recognition and receiving in return master copies of 650 of his pieces. Molds and copies of each artifact are housed at the Museum of Anthropology.

The Eichenberger Cast Collection Records contain forms, reports, and correspondence detailing Eichenberger's casting work while working for the University of Missouri. Included is information about the process used to create each piece, formulas and materials, and details about the original artifacts.

These documents are primarily reproductions of, or notes about, Hispanic colonial census and linguistic records from archives in Central America and Spain. They were made by Museum of Anthropology staff members in the 1970s and 1980s who had research interests in those areas.

Frances Pearle Mitchell (1863-1940) was a prominent local woman and 1879-80 graduate of Stephens College. In the early 1900s, she traveled the world and wrote travelogs about her experiences that appeared in the Columbia Daily Tribune. In the 1930s she donated to the Museum of Anthropology an assemblage of anthropological "curios" collected during her travels. The collection includes a wide variety of items collected from Asia, Africa, Europe, and Mexico, as well as Native American materials.

The Mitchell Collection Records include copies of Mitchell's travel logs that appeared in the Columbia Daily Tribune in 1903 and 1904; Mitchell's original logbook for the artifact collection donated to the Museum; biographical information; and notes regarding background research conducted by Museum staff on Mitchell, her travels, and collections.

Richard L. Sutton, Sr. (1878-1952) was a Kansas City dermatologist who, as a special representative of the Department of Natural History at the University of Missouri-Columbia, made several hunting and photography expeditions in the 1920s to various countries in Africa and Asia. Sutton was particularly interested in the tribal peoples of the areas he visited and recorded their customs through photographs, short films, and several published books. He also published many articles in the U.S. and abroad and gave lectures in universities throughout the country. In recognition of his explorations, the British Royal Society made him a life fellow, and he was honored by the Societe de Geographie in France for his portrayal of Moi peoples in his book Tiger Trails in Southern Asia. In the 1920s, Sutton donated large assemblages of items collected during his travels to both the Museum of Anthropology and the Kansas City Museum; most of these materials have now been consolidated at the Museum of Anthropology.

The Sutton Collection Records include biographical information and background research conducted by Museum staff regarding Sutton and his collections; correspondence between Museum staff and Sutton's son (Dr. Richard L. Sutton, Jr.); records regarding artifact donations to the Museum and the Kansas City Museum; and copies of some of Sutton's original lantern slides and 16mm films.

Grayson Archery Library
Books dating from the 16th to 20th centuries and numerous periodicals comprise the Grayson reference library. This comprehensive library, numbering about 1,000 volumes, is useful for research on every aspect of archery.  These volumes are available for read-only at Mizzou North.

Nancy Morejón Special Collection of Afro-Romance Literature and Culture
Database of works by Cuban author, Nancy Morejón (Havana 1944). Morejón's work addresses contemporary issues of ethnicity, gender, history, politics, and Afro-Cuban identity. Her poems stand as vibrant reflections on the transculturation of Spanish and African cultures in Cuba, on what it means to be a child of both traditions, and on how the threads of this heritage are part of the greater web of the African Diaspora in the Americas.